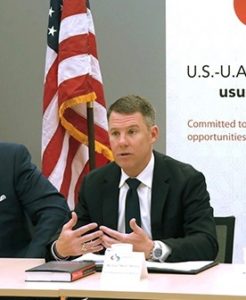 Michael “Mick” Patrick Mulroy is the former Deputy Assistant Secretary of Defense for the Middle East. He is also a retired CIA Paramilitary Operations Officer in the Special Activities Center and a United States Marine. He is a Senior Fellow for the Middle East Institute, an ABC News National Security Analyst, and a Co-founder of Lobo Institute.

Mick is also a volunteer for the Third Option Foundation and with various veterans organizations. He is married to Mary Beth Mulroy, the father of a son who is a U.S. Marine, a daughter, four goddaughters who are all four gold star daughters, and three godsons.

Mick is also a leading proponent of the U.S. military incorporating the Stoicism philosophy into their ethical and resiliency efforts officially.

“I believe it is past time to allow veterans and their physicians to use cannabis for medical purposes to treat PTSD, depression, or other conditions if medical science deems it to be an effective treatment. The VA should cover the cost of these treatments as they would any other.”